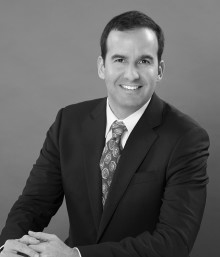 In addition, Mr. Frigon regularly serves as outside general counsel on an on-going basis for companies in a variety of industries including biotechnology, venture capital, software and technology and media. Mr. Frigon is currently member of the Board of Directors and Corporate Secretary of Adjuvance Technologies Inc., a biopharmaceutical company.

Mr. Frigon has significant international experience, particularly in Latin America, having closed a number of cross-border transactions particularly in Argentina, Brazil, Mexico, Chile and Colombia, each valued at over $100 million, and is fluent in Spanish and Portuguese.

Mr. Frigon is a founding partner at Frigon Maher & Stern LLP, which he launched in 2010 after eight years as a securities and corporate attorney at Simpson Thacher & Bartlett LLP in New York City.

During Mr. Frigon’s career he has represented companies of all sizes from diverse industries on a wide range of transactions including KKR and Blackstone portfolio companies in connection with leverage financings and other corporate matters; top investment banks such as J.P. Morgan, Citi and Morgan Stanley in connection with strategic transactions, including innovative deals for the hedge fund groups at Goldman Sachs, Lehman Brothers and Merrill Lynch; and financings and other securities and corporate matters for Fortune 500 companies such as Wyeth, Northwest Airlines, Peabody Energy and Warner Music Group. In addition, Mr. Frigon has represented various technology and emerging growth companies in connection with corporate and financing matters, executive compensation, intellectual property, commercial contracts and governance issues.

Citigroup in connection with a $500 million, Rule 144A offering of convertible notes by SBA Communications;

J.P. Morgan in connection with a $150 million, Rule 144A offering of high yield notes for Plastipak Holdings; and

A vaccine technology company and spin-off of Memorial Sloan Kettering in connection with corporate and IP matters, as well as acting as its outside general counsel;

Cresud S.A. (an Argentine company) in connection with a $288 million SEC registered global offering of rights to subscribe for stock and warrants listed on the Nasdaq;

OdontoPrev S.A. (a Brazilian company) in connection with a $200 million IPO in Brazil and 144A/Reg S offering outside Brazil; and

Vivo Participaçoes S.A. (a Brazilian company) in connection with its multi-billion dollar acquisition of four publicly traded telecom companies, three of which were listed on the NYSE.